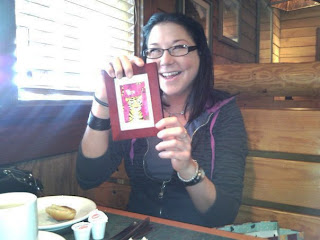 It was time for Mike Kohon to make good on a long-time promise to his little sister. His bold claim was that one day he would get her a Burmese Tiger named "Leo".

I don't know if you've ever tried to catch a live tiger, but they are very fast, very large and slightly man-eating...

Since Kohon was not willing to admit defeat, but also did not want Emily to be mauled by her gift, the next best thing was a piece of tiger art. Kate Cosgrove tiger art to be exact...

I think the photo tells the rest of the story: a gift given, a destiny fulfilled. Thanks Kohon kids, you're grrreat!

ACEO of the WEEK: The Guppy Who Swallowed The World 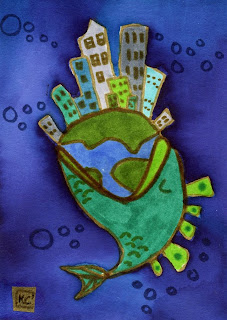 Bid today on "The Guppy Who Swallowed The World"!
This piece is based on being REALLY hungry and not having a car at the moment to grocery shop...

*ACEO: Art Collectibles Editions Originals
a highly addictive form of miniature art...
Posted by To Bell the Cat at 8:06 PM No comments:

ACEO of the WEEK: Cat Kids

Bid today on "Cat Kids" !
This piece is based on my friends and I bundled up tight, waiting for the school bus in the Michigan winter... We didn't dress as cats, but it would've been cooler if we had...

*ACEO: Art Collectibles Editions Originals
a highly addictive form of miniature art...
Posted by To Bell the Cat at 10:30 AM No comments: 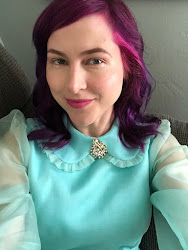